People that have experienced Osaka would probably agree that Osaka nightlife can be a blast! But the city spans over a big area and one should know in what area to party to maximize the fun. Main part of Osaka’s nightlife is divided between two areas; Umeda and Namba. Both places is a great location to spend the evening. There is plenty of things to do and plenty of restaurants & bars. However some difference exist.

But first, the most important thing to remember when exploring Osaka by night is that nightlife in Osaka, regardless of location usually ends at latest 1 a.m.  on weekdays. The reason for this is because the train & subway stops at this hour, also most people work during the week. During weekends the party goes on all night long if you are in the right neighborhood. But even during the weekends the train & subway stops between 01.00 – 05.00 (roughly). So unless you are taking a cab home, you have to decide if you are going to pull an allnighter or take the last train home.

Umeda (うめだ) is a great place to spend the evening. Restaurants with cuisine from all over the world can be enjoyed here. And when dinner is over one can spend the rest of the evening at one of the many bars. Due to the lack of nightclubs in this area it gets relatively quiet after 1 a.m. even on weekends.

Namba (なんば) on the other hand is the place to be for anyone who wants to move from the bar to a proper nightclub. The neighborhood caters to a lot of nightclubs that are open all days of the week. However bear in mind that even in this part of town most of the clubs close at 1 a.m during the weekdays. There are a few that are open until morning during the week but don’t expect too much after 1 a.m. During the weekends the party is good all night. Some clubs still close after midnight but when they close others open. Even when most clubs close in the morning, others open.

Osaka nightlife summarized: The party is good during weekdays but most people catches the last train home (midnight – 1 a.m.). When the weekends comes partying all night won’t be a problem. For drinks & food either Umeda or Namba will do great. Partying is done best in Namba. Both areas has a mixed crowd of young and older people. 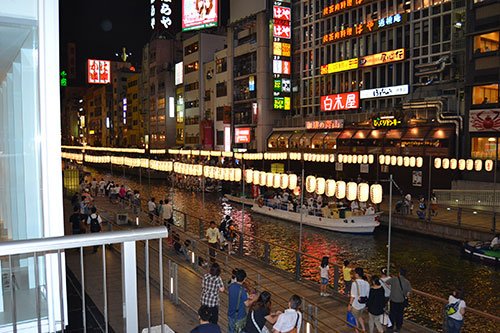 If you don’t know where to go when you are in Namba. Ask for Dotonbori which is the canal you see on the picture above. When you find this you will surely find something to do as well.